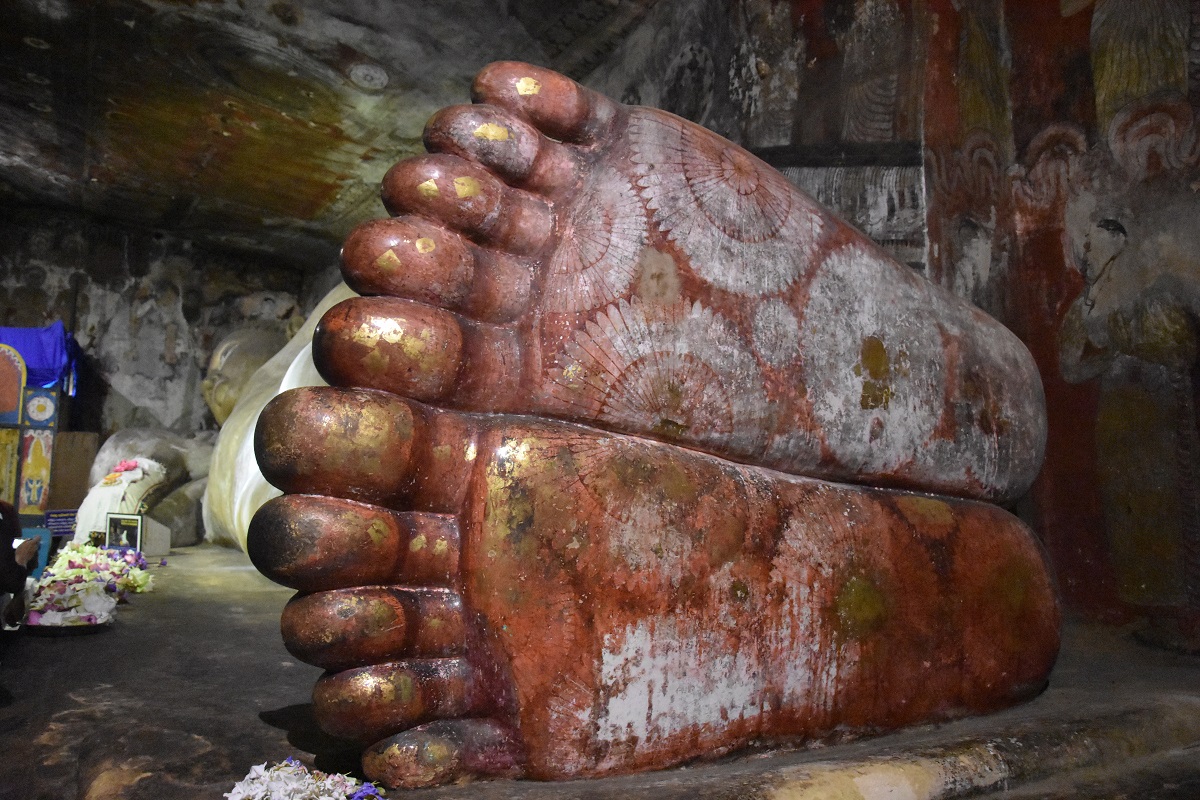 We were in Kandy for 3 nights.

It took around 3.5 hours from Colombo to reach Kandy. By the time we reached it was around 6pm. Our rooms were booked in Sevana City Hotel.

It’s all about location for this hotel. It does not give you much view, at the least the rooms we stayed, had none. But the hotel is within 5-15 mins walk from everything that mattered in Kandy. The rooms were also excellent. Morning breakfast does not have an elaborate menu, but food was really good! And it was very reasonably priced.

And yes, it has a swimming pool on the terrace. The view from the 7th floor breakfast area is awesome!

Back to our story……

We were tired from the travel. We nestled in our room to take rest, before heading out for dinner. We had light dinner at a South Indian restaurant, right opposite to the hotel. We headed towards the city with the intention of exploring and found that the main happening area is around a 500m along the same road, towards the Tooth Relic Temple. Explored a bit more, had pastries and hot chocolate in a shop before heading back to hotel.

Our agenda for the day was to visit the Tooth Relic Temple and explore Kandy. We had breakfast in Sevana, headed out, walked around the Kandy lake for quite some time. Checked out local shops and bought a few things. 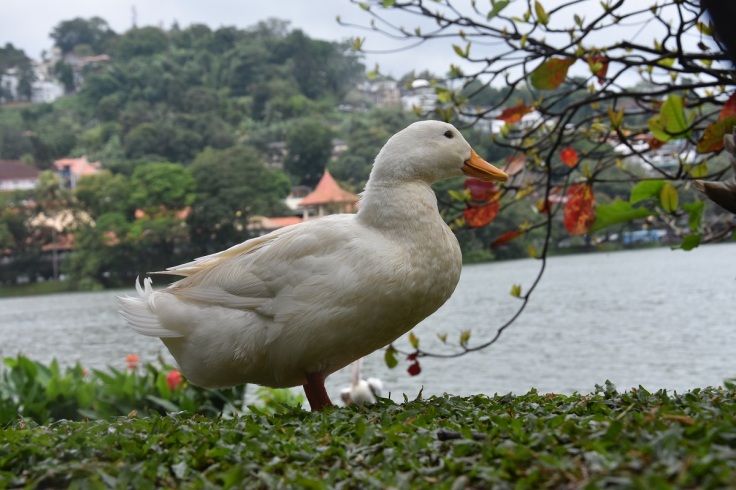 We had lunch in Devon Hotel. It’s quite well known for it’s food. We thought of giving Sri Lankan local cuisine a try. Frankly, it was not so tasty.

After lunch we headed to the Tooth Relic temple. Called the Sri Dalada Maligawa, this temple holds a tooth of Lord Buddha. This relic always had a very prominent place in Sri Lankan history.

We explored the temple, the museums (nothing extra-ordinary, but definitely worth a visit) within and settled down near the main temple for the ceremony which happens daily at 6:00pm.

The drums starts to beat, and as the crowd mounts they open the door of the temple for the public to get a view of the Tooth Relic. It could have been much simpler to just keep the doors open all the time, but I guess, that would make it less special?

Anyways, there are many parts of the temple which open up only during this time (and morning 9:30 am) of the day. We visited those areas and headed out of the temple.

Had dinner and headed back to the hotel.

We had booked a cab to take us to Dambulla cave temples. Cab was 6000 LKR. For a 9 seater traveler which came, it was quite reasonable.

It was raining quite heavily when we left Kandy.

On the way, our driver suggested a visit to, Sri Muthumariamman Temple, Matale. We have seen enough temples in India, we thought. But said ,”OK, let’s go”. The temple was actually very beautiful. 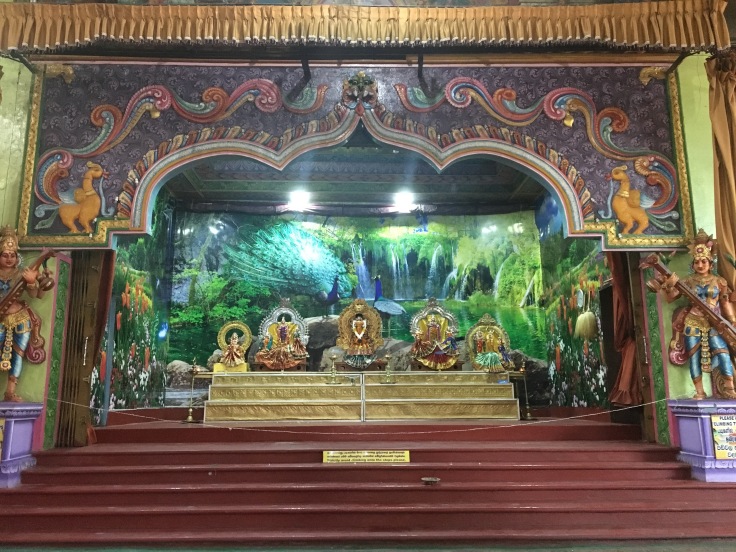 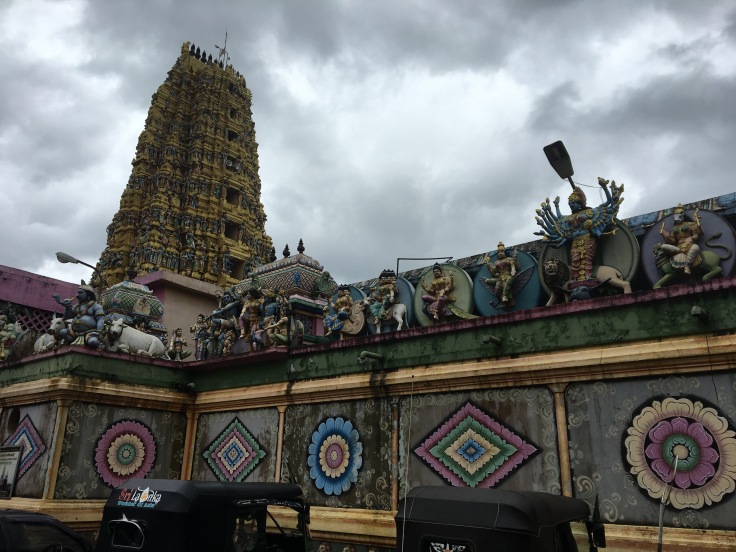 Overall the journey to Dambulla takes around 2 hours. Dambulla cave temples are on top of a hill. This hill has 2 ways to climb. One from the Golden Temple, the other is – “Not from the Golden Temple”. The “other way” is way shorter. It is around 350 steps. But short steps, and it hardly takes 15-20 mins for the climb.

There are in total 5 caves. All filled with beautiful paintings and statues of Lord Buddha in various poses.

Compared to the Ajanta, Ellora caves, these caves were less than one fifth in size. But much better maintained. However, the new colors put on the statues, makes it look very artificial, much like a naturally beautiful lady with too much of make up on her!

The place is however very beautiful and a must visit place if you are in Sri Lanka. 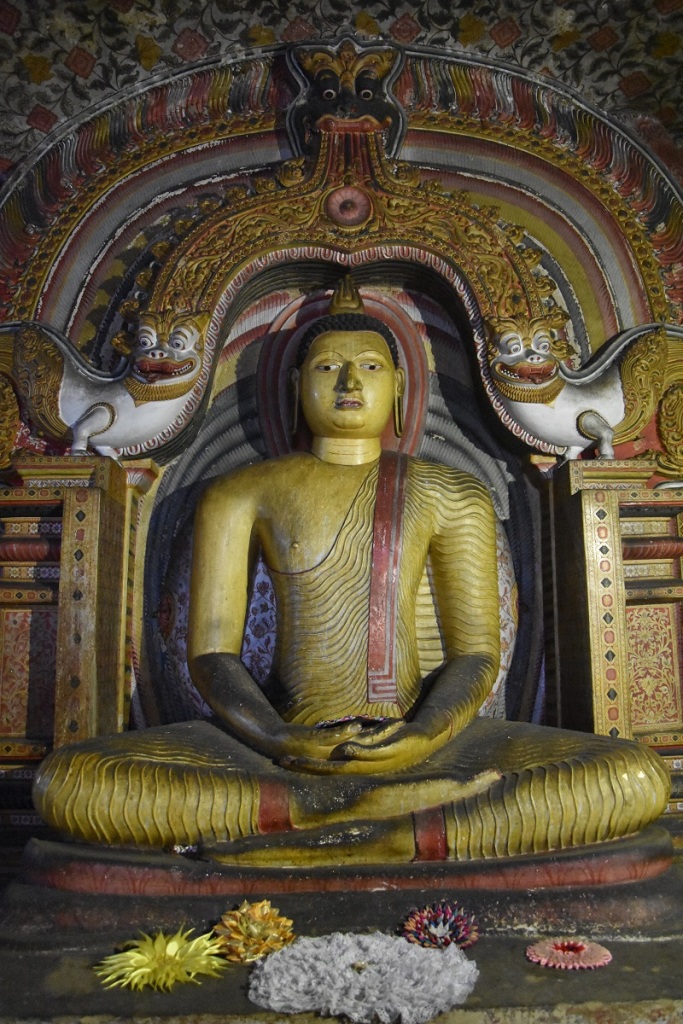 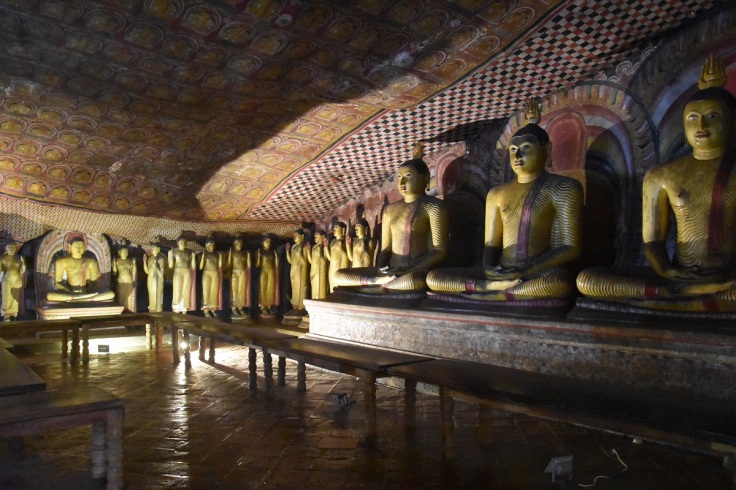 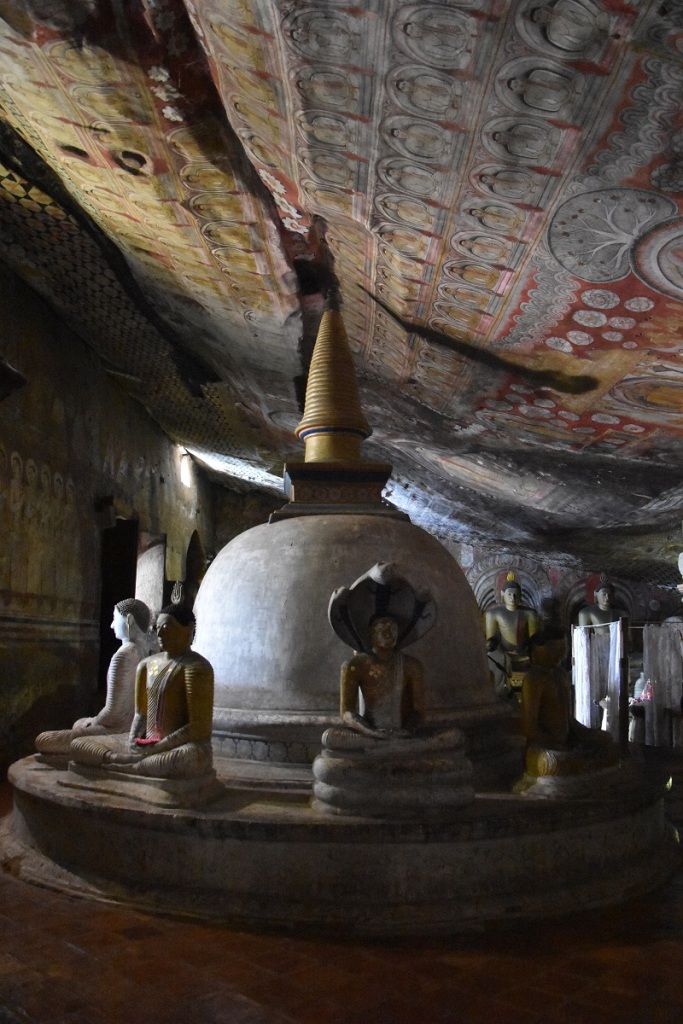 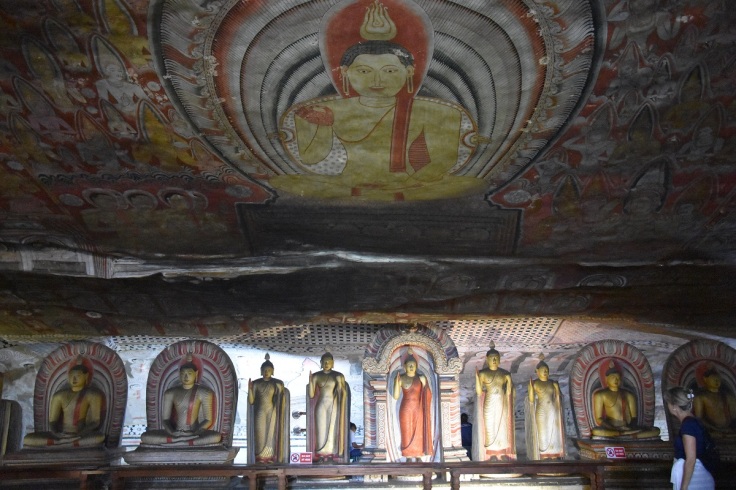 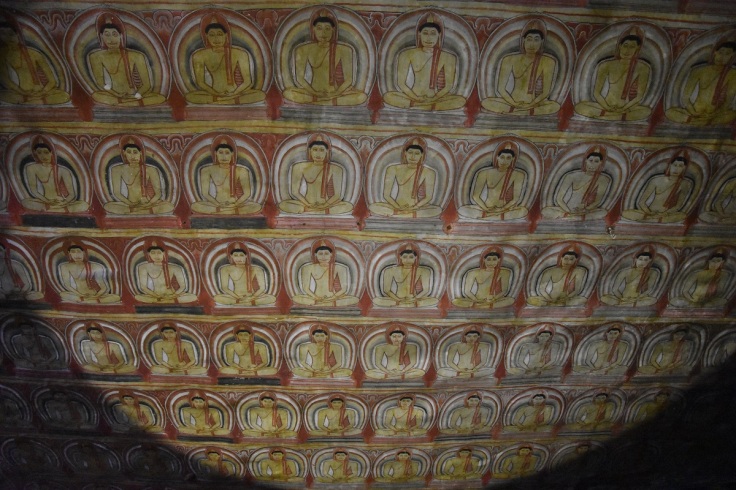 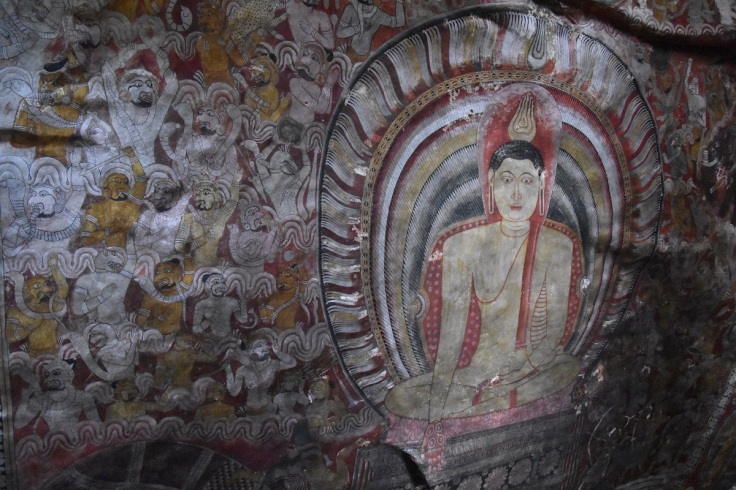 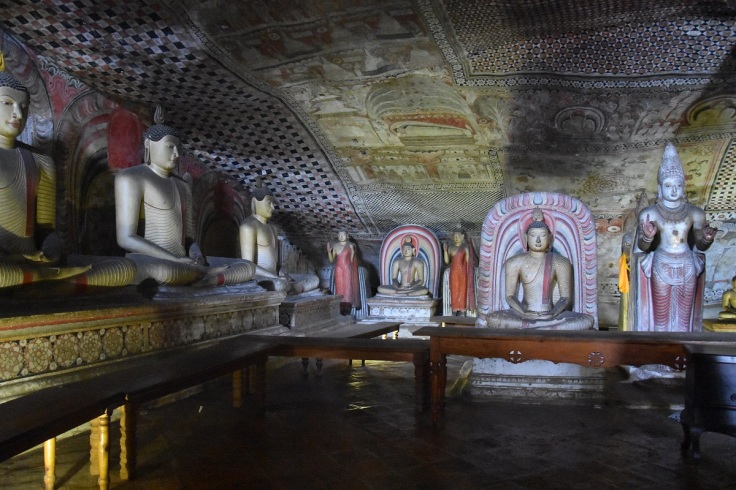 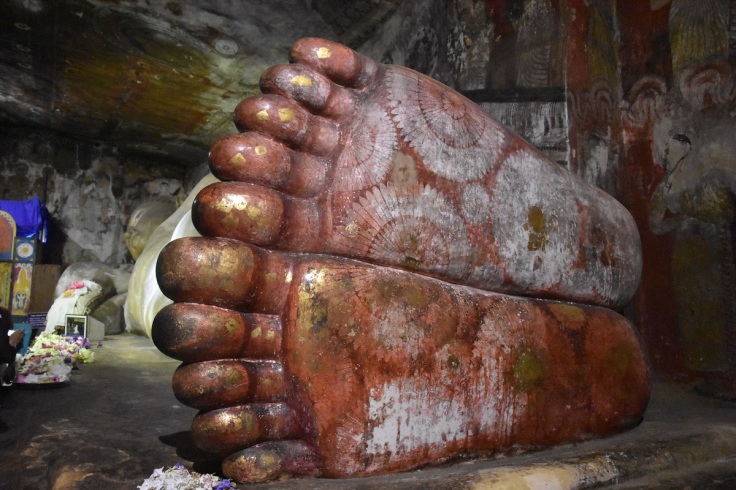 Coming down took another 15 mins.

Then we headed by road to the Golden Temple, which is just a massive statute of Lord Buddha. There another museum here, which you might want to visit, but you wouldn’t miss much if you don’t.

We headed back soon. Having late lunch on the way back, we reached back to Kandy around early evening.

We tried out various places for food that night. One being Pariera and Sons, a bakery chain which we found almost every city we later went to in Sri Lanka. Do try their french toast. I found it delicious!

Next day we had our train to Hikkaduwa from Kandy. Train was at 6am. We were most thankful about the location of the hotel at this time, as streets were deserted during this time. If the station was not within walking distance, I have no idea, how we could have made it to the train!

These are travelogues of me & my better half, Moumita. Recently we had another 4 legs join our family - our Labrador Mishki, who has now started accompanying us in our trips.